One of the biggest downsides of a felony conviction is the loss of certain rights. Many felons will find that being released from prison is not the end of their problems.

Amongst the lasting effects of these convictions is the revocation of gun rights. That means a felon cannot buy, possess, transport, or use a gun or ammunition. For die-hards, the question then becomes: Can a felon go to a shooting range? 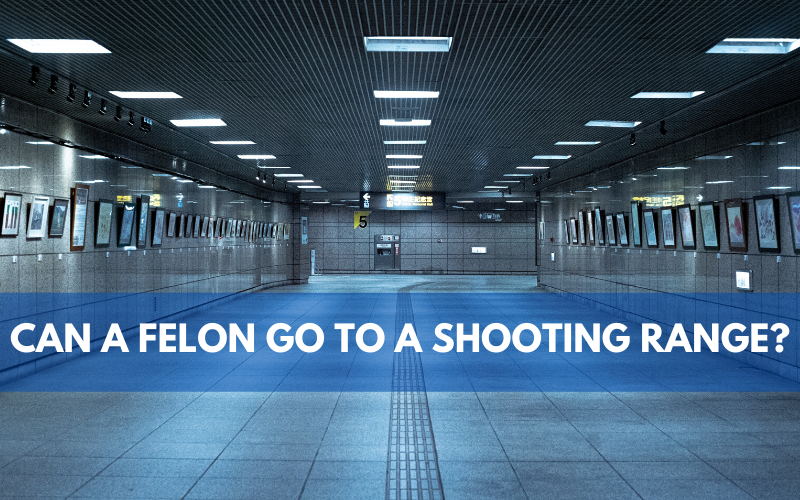 If you already had guns and ammunition before your imprisonment, you are expected to surrender them. This can be to law enforcement or to another person who still has their gun rights.

This requirement is not just for felons. Certain misdemeanor offenses, such as domestic violence can also lead to loss of gun rights. Those dishonorably discharged from the military and with mental defects are also not permitted.

This surrender can be devastating for those raised around guns. Whether for target practice, hunting, or protection, it can be a shock to find oneself unable to access them.

Visiting a shooting range can be an ideal solution as it would mean getting to handle guns again. It would also mean getting a chance to practice their shooting.

As one waits for the right opportunity to restore their rights, a shooting range can help keep them in practice. They do not have to let their skills suffer and fade.

Can A Felon Go to A Shooting Range? 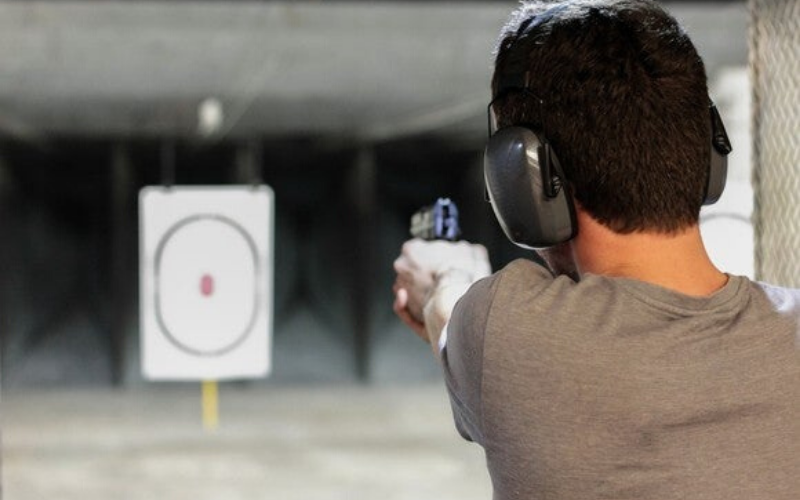 The straight answer would be no. Going anywhere there are guns puts a felon at risk of being accused of possession. This can be actual or constructive.

Actual possession is basically holding it. Constructive possession can mean having it in the household even if it is not yours. Even if it belongs to a spouse or other family member, it should not be in the same house.

Constructive possession can be charged if the felon knows the firearm was in the house. Or, if they can exercise control over it.

Even if not holding it. Being near an unattended gun may lead law enforcement to believe it is yours. In some places, even an empty case can be a source of trouble.

Possession of a firearm is considered the ability to exercise instant control over the gun, whether it is on the person or another.

There are no specific laws that authorize shooting ranges to carry out background checks on patrons.

However, without a background check, there is no way for shooting ranges to know who is being truthful.

This is unlike with licensed gun dealers. Whenever they sell guns and ammunition, they must carry out background checks. This is a requirement under the Federal Brady Act of 1993.

Why Stay Away from Shooting Ranges?

Mostly, felons are caught when they buy ammunition at the shooting range. ID details and/or fingerprints are required to be taken and submitted to the Department of Justice. If you are a felon buying bullets, you can expect to be arrested.

Shooting ranges often attract bad elements. The staff is usually on the lookout for odd behavior. Severally they have helped identify felons and non-felons seemingly preparing to commit a crime.

Many felons get visibly nervous at the idea of being caught and re-arrested. Given this risk, it may be advisable to keep away altogether.

Note that most gun ranges now have video surveillance. If this footage captures a felon at the range, it may be used against them in legal proceedings.

Many in law enforcement also spend time at the range. They go to practice and compete with colleagues and even family. Being in such proximity just does not seem to be worth the risk.

Let’s look at the specific laws that have an impact on this and the penalties attached. 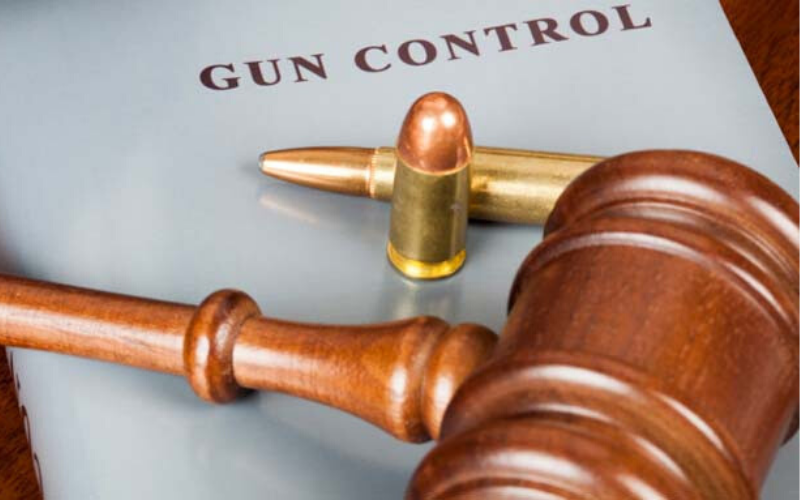 The Federal Firearms Act (1938), was the first to prohibit the sale of firearms to convicted felons. The Gun Control Act (1968), retained this prohibition against felons. it also added drug users and the mentally incompetent amongst those banned.

This act was later enhanced in 1993 by the Brady Act. It created a background check system for gun purchases from licensed sellers. A federal form called the ATF 4473 must be completed to facilitate this.

In a majority of states, the checks are conducted by the FBI’s National Instant Criminal Background Check System(NICS). These checks are carried out on phone or online. This allows for an almost immediate decision on the sale.

Background checks may, however, be avoided if not buying from a federally licensed dealer.

Beyond purchase, most states do require permits for civilians to carry handguns. The terms for concealed and open carry vary from state to state. The laws tend to be much looser for those carrying shotguns or rifles than handguns.

This brings us to the issue of weapons felons may be able to handle and possess without being arrested.

Exceptions to The Rules

Antique weapons can be an exception. These weapons are those made before 1898. They are muzzle-loaded and have a different firing mechanism.

They are typically loaded from the barrel end or the muzzle. Rather than being set off by firing pin, a flintstone creates a spark.

Depending on the jurisdiction, it may also be possible for a felon to own a pellet gun or airsoft rifle. In some places, they are outrightly banned while in others, felons need only conform to certain designs.

Since most are used for hunting purposes, it would be best to consult the state department of wildlife conservation. They can tell you if your weapon is permissible. Also, consult a lawyer to ensure this will not land you in further legal trouble.

What Happens When a Felon Is Caught with A Firearm?

The penalties for a felon in possession can be serious. Remember this will make you a repeat offender, if not already one.

This possession is already another felony crime. In many states, this crime can attract a sentence of 1-3 years in prison. This can be combined with fines and other penalties.

If this is not the first time being caught with gun possession, the penalties can be higher. With 28 states having some form of 3 strikes laws, this offense can be counted as one. 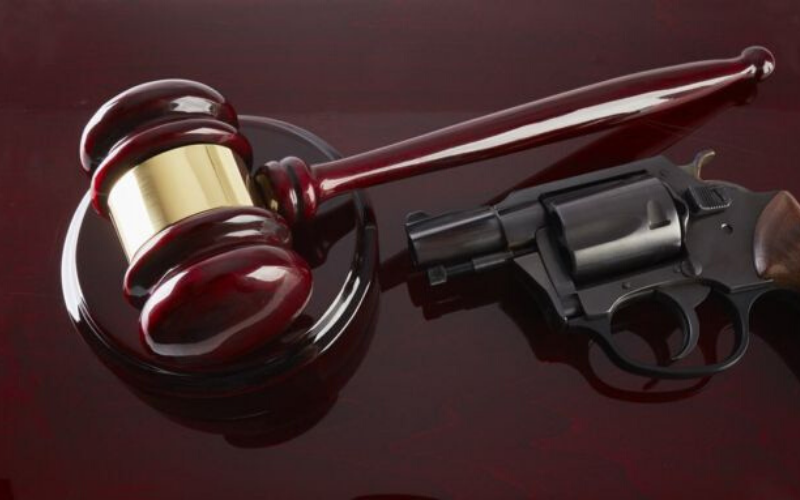 If a felon can secure an expungement of their criminal record, they may have their gun rights restored. Depending on the state, a felon may have to wait for a certain number of years before they can apply.

This however only applies at the state level. Those that get expungement and restoration of rights at state level may not enjoy the same at federal level.

In states like California, some felony convictions may be eligible for a reduction to a misdemeanor. This can enable a qualifying offender to have their gun rights restored. ‘

Texas laws automatically restore rights 5 years after release from the prison system. The firearm must however only be possessed at the residence of the felon. If a conviction is set aside full rights may be restored.

In Ohio, a felon may make a petition to the court of common pleas to have their rights restored. The court considers multiple factors including nature of the crime, time since release, and if now law-abiding.

A presidential or governor’s pardon can also help in restoring firearm rights at both state and federal levels.

Because of the varying state laws and procedures for restoration of rights, it is advisable to seek legal counsel. This will help you discover the correct procedure to follow if the remedy exists in your jurisdiction.

Gun rights should be considered a privilege and not a necessity. Given the risk involved in being anywhere near guns, felons should seek alternatives.

While some firearms or weapons may not be illegal to possess, the risk is not worth it. We recommend finding an alternative outlet for fun and stress relief. One that puts a greater distance between you, guns, and law enforcement.

If you were long released, you may be able to pursue the restoration of your rights through a pardon or expungement.  Consult a lawyer to find what possible remedies there are available to you.

Until you find a solution that restores your firearm rights, avoid any association with guns. Better safe than sorry.