There’s barely anything in life such as the feeling of finally leaving the confined spaces of a prison.

Welcome back to the world of freedom!

However, to keep away from going back there, you’ll have to be very careful now. If you like it outside, you cannot afford to break the law.

Let’s say you are a hunter. You know that as a convicted felon you cannot own a firearm. You think for a while, and you realize that you can hunt with a crossbow. 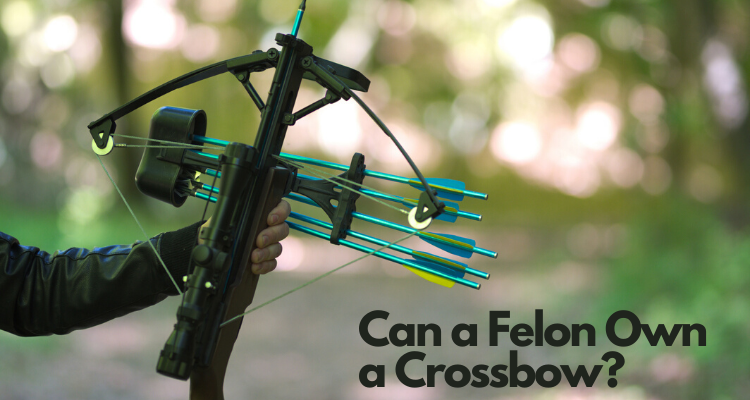 Now, the question is – can a felon own a crossbow?

It turns out that, except in a couple of cases, a convicted felon can own a crossbow. That is the short answer though, and we highly suggest reading through the whole article to learn about the details.

By now, you’re certainly aware that some of your rights and freedoms have become restricted. You don’t want to go back to prison over some law you didn’t even know existed.

Is a Crossbow Considered a Firearm?

Well, is it? First, let’s see what is actually considered a firearm.

(A) any weapon (including a starter gun) which will or is designed to or may readily be converted to expel a projectile by the action of an explosive.

The second important question is – what is a crossbow?

A crossbow is a weapon, similar to a bow. It fires bolts, projectiles similar to arrows (only shorter). It uses elastic potential energy to expel a projectile.

Now, to answer our question – is a crossbow considered a firearm? After reading both the definitions, the clear answer is no. Crossbow is a weapon, but it is not classified as a firearm by the US federal law.

Can A Convicted Felon Own A Crossbow?

Simply put, this means that as a felon you can own a crossbow. This is great news – you won’t have to abandon hunting after all! The only thing you’ll have to do, in case you’re using a rifle, is to change your weapon of choice.

Wait for a second though, let us tell you something about…

Restrictions on Hunting with a Crossbow

To find out more about these restrictions, and to be certain you are on the right side of the law, you should consult the laws of the state you live in. As we know, every state has a different law system. Think about it, just because something is legal in Alabama, doesn’t automatically make it legal in Texas.

Can A Felon Hunt with A Crossbow?

The shortest answer is yes, but keep on reading. There are some nuances depending on where you are hunting.

Most of the hunting laws concerned with crossbows are restrictive of place and time you can use it, not of the person using the crossbow and their criminal history. Still, you don’t want to put yourself in a situation where you could potentially break any law.

Be smart and inform yourself thoroughly; even consider consulting a lawyer. You might think that it is costly now, but is it more costly than going back to jail? It’s on you to decide.

So, restrictions might you face as a crossbow hunter.

For one example, you might be restricted from hunting a certain type of game during a certain period of a year. You will have to check when your state’s bow hunting season is, and abide by it.

If you used to hunt with a rifle, there may just be some good news for you. In some states, bow hunting season lasts longer than gun hunting season! You will be able to enjoy your hobby and passion for a while longer now.

Another interesting fact is that certain states have completely different dates for gun and bow hunting seasons.

Apparently, bow hunters rarely use fluorescent orange safety vests. That’s an issue because rifle hunters can easily have you mistaken for a big animal.

So please make sure that you check the right hunting season. Remember, you’re not interested when it is allowed to go hunting with a rifle – only crossbow.

If you’re living in Rhode Island or in Massachusetts, you might not like the next thing we have to tell you. In those two states, there are strict regulations that might prohibit you from crossbow hunting. Depending on the type of felony you committed, you might not be able to get your license.

If that is where you reside, definitely consult the local authorities. You might be able to go crossbow hunting after all!

Are Crossbows Legal in My State?

We have established that it is allowed for a felon to own a crossbow according to US federal law.

However, you will have to be careful about the individual state laws. Depending on the state in which you reside, you might actually be prohibited from owning one.

For example, in the state of New York, it is illegal for an ex-convict to possess weapons. And, unfortunately, a crossbow is classified as a weapon.

Let’s talk a bit about Oregon now. As of 2015, no matter whether you’re a felon or not, you can’t go hunting with a crossbow. There have been some attempts in recent years to revoke this law, but they have all failed.

Crossbows have been with us for a while now. The oldest one that’s been found dates from the 4th century BC. There are many differences between that one and the modern ones though. 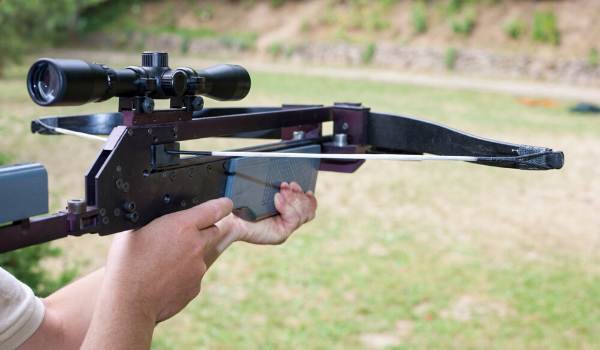 Let us introduce you to the 3 most common types of modern crossbows:

It is the oldest version of the modern crossbow and the most similar one to the ancient crossbows. We call them recurve because the ends of the bow curve to the opposite side compared to the middle part.

The most common materials that this type of crossbow is made from are aluminum, magnesium and carbon fiber. Since their draw length is a bit longer compared to other types, the acceleration for the bolt is greater. The downside of this is that it makes them a bit noisy upon firing.

They are known for great power and speed, which makes them an excellent choice when hunting large game. On the other hand, they are quite massive which can make them a bit uncomfortable to carry in the wilderness.

More complex in design, but a lot easier to use than his cousin recurve. You might struggle a bit when setting it up for the first time though. We have warned you!

This type has shorter limbs, however, due to its sturdiness, you won’t be losing on any power nor projectile acceleration.

Compound crossbows are made from synthetic materials that add to their durability. Because of their design, they are very accurate and resistant to weather changes.

These crossbows have a short draw length and are very compact and narrow, making them the ideal choice when hunting in limited space. The makers designed compound crossbow for minimal vibration and noise levels. These features make them a lot easier to use than recurves.

You have to be very careful while handling them, though. They are heavy and they lose their accuracy if you drop them often.

There are certain complications with their maintenance. And due to the number of parts, wear and tear happens a lot faster than with recurve crossbows.

The most modern and most technologically advanced one. The child of the rifle and the crossbow, inheriting the best of both worlds. People praise them for their exceptional accuracy, a trait they share with rifles.

They are the narrowest type which makes them the best choice in case you’re hunting in extremely tight spaces. They pack the greatest power and they release it with the least noise.

The only downside to this type of crossbow is that it is a bit difficult to operate. You will require a bit more strength while operating due to its great power. If you needed extra encouragement to hit the gym, now you have it!

In the end, no matter which type you opt for, you will have to follow certain safety precautions when handling your weapon.

For example, you never want to point your crossbow in somebody’s direction. Load the bolt only when it is safe to shoot and keep your finger off the trigger until you are ready to shoot. This is pretty self-explanatory, but never shoot the bolt straight up in the air.

While using a crossbow, as with any other weapon, always think about your safety and safety of the others first!

Help a Felon Re-engage In Activities They Once Loved

We share a thought that being an ex-convict should not prevent you from enjoying the activities you love. We are here to help you re-engage in them while keeping you on the right side of the law.

You might not be able to use a rifle to hunt as you did before. But that is no reason for you to give up hunting completely. Just get yourself a fine crossbow and off you go to another hunting adventure! 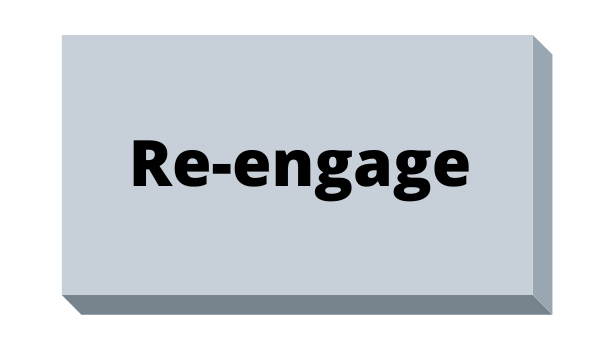 It will feel a bit different in the beginning, and you might have to re-learn a couple of things.

Nonetheless, we are positive that it will be worth the hustle. With time, crossbow hunting will become a part of you, and you’ll thoroughly enjoy the thrill of the hunt again!

If you’re an experienced crossbow hunter, we are happy this article made you realize you would be able to get back to it. Being outside of prison means being able to enjoy the freedom you regained. Freedom to practice and enjoy things you used to enjoy before you got convicted.

For some of us our favorite hobby, for some even passion, is hunting. If we can keep on doing it and not break the law, I see no reason for us not to.

Getting back on track in real life, life outside of prison, is not as easy as it seems. It has been a while since you were free to go hunting. You can even think that you might have forgotten all about it.

It is important for you to go out and do this. Re-engage in activities that you used to love once. It will make you feel that much better and things will slowly start falling back to their places.

To conclude everything we talked about so far:

Can a convicted felon own a crossbow? – Yes.

Can a felon hunt with a crossbow? – Yes.

US federal law does not recognize crossbow as a firearm. That does enable you to own one and use it for hunting if you so desire. However, there might be restrictions on its usage in certain places.

We urge you to check your state laws first. There are a couple of states you won’t be able to go crossbow hunting. In case you live in New York, you won’t even be able to own one.

If you are allowed to possess a crossbow, when you decide to go hunting, please do check if the bow hunting season is open. Gun and rifle hunting seasons are irrelevant for you.

Pick between the recurve, compound and rifle crossbow. Each one of those comes with its own advantages and disadvantages. Talk to your local dealer and consult google before making your final choice.

Most importantly, stay safe and take your time to study the relevant laws.