Taco Bell has done a good job of popularizing Mexican food across the country. This fast-food chain is famous for its tasty and affordable meal choices. These include tacos, burritos, nachos, and more.

The company has over 7,000 locations, the majority of which are owned and operated by franchise owners. It also has an estimated 210,000 employees.

For felons looking to join the company, a good question would be, does Taco Bell drug test?

The fast-food business is well known for being a refuge for those with a criminal history. The industry has a strong demand for entry level employees. This is thanks to their many locations, long hours, and high employee turnover.

Chances are if the location manager likes you, you will be hired. This is the person you need to impress the most. However, if there is a policy on drug testing, they may not be able to help.

The same may also apply to background checks. However, on this, franchisee owners are typically left to make the hiring decision.

They may consider other factors. Such as the severity of the offense, how long ago it was committed, and if it conflicts with the job. Credit reporting limits may also make it possible for criminal convictions to no longer be accessible.

Let’s first consider why these tests are done. 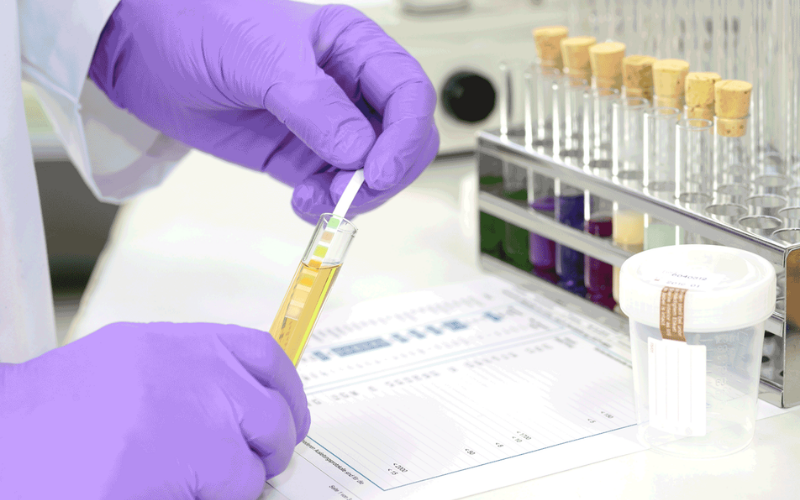 In many ways, drug tests are considered more vital than criminal history. Many criminal convictions can be quite old. In states with reporting limits of up to 10 years, they do not appear thereafter.

Drug tests are a more current evaluation of a person’s state. An employer will be able to tell if the person has been using any illicit drugs in recent times.

The key reason employers drug test is to mitigate risks. Having employees that are on drugs can interfere with work. They can become too high to function properly and unable to perform their duties.

The last thing you want is to have people on staff that are unable to serve customers properly. It can badly affect your reputation and bottom line.

They can also easily become injured. In a restaurant environment, the injuries can be substantial. Hot grills, hot oil, and knives are just some of the ways they could be hurt.

They could also end up injuring others unintentionally. If making deliveries while high, they could end up in a collision or other accident.

No employer wants injuries. They also do not want to be sued for allowing such injuries by having inebriated staff. The liability concern is significant.

Employers do however have to factor in the cost involved. Drug tests are usually paid for by the employer. Where you have to regularly hire replacement staff, it can become quite costly.

How Drug Tests Are Done?

Drug screening can be done in a variety of ways. They can test your urine, blood, sweat, saliva, and hair.

Most companies, including Taco Bell, will however use urine tests. Drug metabolites linger for a while in the urine. The period will vary based on the particular drug taken.

The most common test is the immunoassay test. It is quick though sometimes faulty. If one tests positive, they may be subjected to a secondary screening.

Taco Bell restaurants that drug test normally use a 5-panel urine test. This means they test for 5 specific drugs. These are cocaine, amphetamines, PCP, THC, and opiates.

It is possible that for more corporate jobs they may undertake more expansive 7 or 10-panel drug tests.

Taco Bell leaves hiring decisions to franchise owners. So even the issue of background checks and drug tests is also in their hands.

Based on online employee testimonials, most Taco Bell locations do not drug test. A few are known to be hardliners and will conduct pre-employment screening. The majority however do not.

Most people know if they have been hired by the end of their interview.

Most such restaurants are small businesses. It is not surprising they would not want the added cost.

However, there is an exception to this rule. When there has been a workplace accident and injury. And if an employee is caught taking or with drug paraphernalia.

In these cases, Taco Bell does typically drug test the employee involved. It can be grounds for dismissal if they test positive.

Some locations are also believed to conduct random screening.

How to Pass a Drug Test?

The best way to pass a drug test is to take a break and allow your body to filter out the drugs. Most drugs will filter out of your system within 3-4 days.

THC or marijuana is however stubborn. It can sometimes still be detected even after a week of abstaining. Give yourself as long a time as possible for your urine to return to normal.

You can also try detoxing treatments to try and speed up your metabolism. Some people will also drink a lot of water, but this is unreliable.

Another option would be to tamper with the sample so it is invalid. This can give you a few days’ grace to abstain and naturally detox before having to re-test.

You can also opt to provide someone else’s urine. This means collecting urine from someone that is clean and somehow providing it as your sample. You will however need to be careful so as not to get caught.

You will have to be creative about how to get the sample into the cup. This is because even urine collection can be supervised leaving little chance to introduce a fake sample. Not to mention having to maintain the expected temperature range.

Taco Bell is a fairly decent employer. They offer flexible work schedules that are a boon to those with other obligations. They also offer 4 weeks of vacation and half-day Fridays.

For those in school, the company offers a generous reimbursement scheme. There are even scholarship opportunities for employees and their kids.

Their concern for the family is further demonstrated by their 6-week parental leave allowance. For both mums and dads.

If you wish to secure all these benefits, you may need to be careful about drug testing. If you do not keno that the location you are going to tests, then abstain just in case.

The real risk is however with random drug screenings. They pop up anytime and do not give much notice for detoxing.